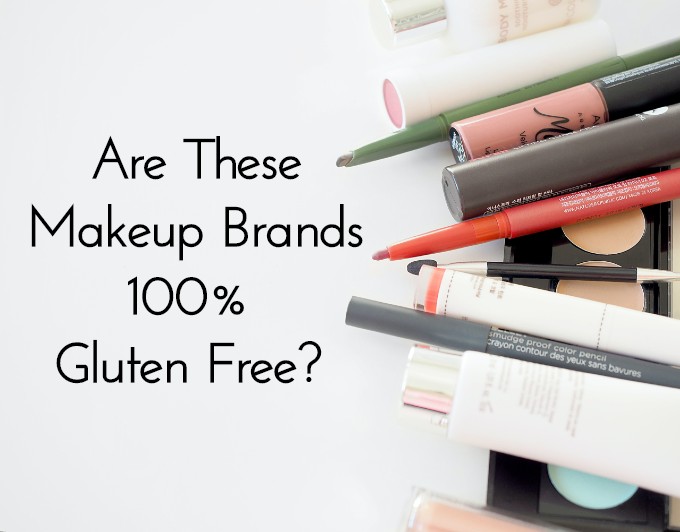 Everywhere you look today, someone is claiming to be gluten free. You’re pretty used to this in food, since all the trendy restaurants have supposedly gluten free menus: “Get our trademark burger! With no bun, none of our trademark sauce and no seasoning! 😀 Oh and don’t worry that we bake our trademark buns in the kitchen- there’s no wheat in your burger so obviously you’ll be totally fine lol”.

But now this attitude has bled into makeup. And just like in food, this may be OK for some people. But for those of us who get a headache just by walking into a bakery? Who avoid eating at other people’s houses because their contaminated kitchen makes us sick every time? Who are EXTREMELY CAREFUL that no gluten is anywhere in anything we put on our bodies?

It’s turning into a minefield for us.

“Gluten free” does not mean gluten free. Just because a company says something is safe, doesn’t mean it actually is.

Here’s 5 companies who advertise themselves as gluten free, but should be avoided if you’re extremely sensitive.

Don’t be fooled by their very carefully worded gluten statement. They are not lying to you, but all they do is formulate without gluten ingredients. They have no control over cross-contamination at any stage of the game.

This is fine for many people, and in fact some readers of Gluten Free Makeup Gal have reported being able to use Tarte without issue. However, more sensitive readers have told me they had terrible reactions from using Tarte makeup. Stay away from this brand if you’re one of those sensitive folk.

This one is incredibly tricky. In several of their products, they use isolated barley protein, which has been processed to “remove gluten”. You can read my full blog post about it here.

It’s becoming quite trendy to remove gluten from gluten grains. But how safe it actually is remains a hot debate. Funny how the people who claim it’s safety the loudest are the ones selling gluten-removed products… Technically, these ingredients can pass our current gluten tests. But there is evidence to indicate that the gluten-removal process simply changes the form of the gluten and does NOT remove it entirely (again, read the previously linked article for details). This allows the product to pass the tests, yet still aggravate a sensitive person.

Not all of the products have isolated barley protein. But if that ingredient concerns you, it is processed​ in the same facilities as every other “gluten free” product. Thus making everything this company makes dubious for the extremely gluten sensitive.

They will not disclose any detailed information about their gluten policies. Word for word- “we are not able to discuss specific details or sourcing of our product ingredients and formulas”.

If they won’t give sourcing details, we can’t know what they consider safe to be. What does gluten free even mean to them!? No product is worth that level of uncertainty.

The last time I heard from this company, they told me that oats could never be contaminated with gluten, because oats don’t have gluten in them. When I asked if they were using CERTIFIED gluten free oats, they never responded. In fact, after 2 years of trying, they still haven’t replied to my questions.

So maybe their oats are gluten free now. Maybe they understand gluten contamination better now. But if a company won’t give detailed gluten information, that in and of itself is a huge red flag. Do they have something to hide?

While I love what Ava Anderson stands for, they also only formulate without gluten and cannot guarantee a lack of cross-contamination. It seems like they understand gluten fairly well otherwise, since they do use certified gluten free oats.

If you’re not incredibly sensitive they may be OK for you. In fact, they’re such a cool company, you should probably check them out if you can. But if you’re very sensitive, stay away and admire from a distance.

Again, these companies are not safe for those who are extremely sensitive. If you’re not terribly sensitive, they may still work for you just fine. Every person’s level of sensitivity is different and what works for one person may not work for another.

But when your health is at stake, there’s no such thing as too careful.

So how about you? Will you be avoiding these companies, or will you try them anyway?